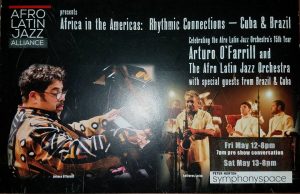 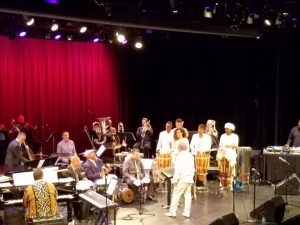 Africa in the Americans: Rhythmic Connection of Cuba and Brazil

Africa in the Americans: Rhythmic Connection of Cuba and Brazil was a performance at symphony space. The orchestra is led by pianist, composer, and director Arturo O’Farrill. Arturo O’Farrill is a jazz musician, a pianist, composer, and director of the Afro Latin Jazz Orchestra. He is notable for Afro-Cuban jazz. He has received two Grammy Awards and four Grammy nominations. He also trains and utilized other musical forms such as free jazz and experimental hip-hop. The orchestra is consist of 4 trombone, 4 trumpets, 5 saxophone, drums, bass, piano, bongos, congas, Brazilian shaker and DJ booth. The list of instruments I could expect what it would sound like.  I expect it to have a wide range of dynamic covering from low to high tones. I was sitting on the upper level to the left just proximally 10 feet away from the stage. Taken this into consideration this perhaps affected the way I perceive the music. Rather than being in the middle where is equal music dynamic distribution.

The movement has a dense texture because numerous of instruments playing simultaneously. Instruments such as the saxophone and percussion instrument pitch and timbre are distinctive. It is difficult to perceive the piano, shaker, and the DJ instruments. When many instruments are playing simultaneously. The chances of each instrument drowning out the other are likable.  Continuing, each instrument was playing repetitive notes. Also, they are using the staccato technique. Sometimes there would be trumpet and saxophone come in to play a melody on top of the uniform base. The uniform base is formed by varies of instrument repeating notes. When the melodies played by the brass instrument created a contrast and also highlighted their melodies. The conductor would also signal for sforzando. The brass player would play staccato notes that are a higher pitch. This is also another method of this motif to have short breaks then proceed back to their uniform melodies. During the 3:00 time period there is a small part for soloing trumpet. The rest of the instrument pause temporary with exceptional of the bongos. The bongos would steady continuously strike along the solo trumpet. This technique provided foreshadow sound and accompanied the trumpet. This instrument does not exceed the pitch of the trumpet. The audience could focus on the sound of the trumpet easier rather than another instrument that is doing individual motif. The Dj could be heard sometimes as cutting. It has a a scracth sound. It would cut the notes up and repeat it. At the 4:31 the audience could see the utilization of unity. Each piece is continuous playing but all instrument stop at the same exact time. Rather than the constant sound, it provided breaks that give a dissonant sound effect. The orchestra ending was unique due to a utilization of sforzando. The group would make a sudden stop and quickly played again. While the bongo played its own fast pace melodic motif to also provided contrast to the uniform sforzando.

Overall the movements are able to utilize a uniform staccato base and built short solo accompany by uniform sound. They also emphasize on sforzando since is one of the main contrast points of the movement. This particular orchestra insinuates a “live” atmosphere since it has a lot of dynamic and quick tempo. In the past, I attended orchestra that utilized legato and tells a story. Those pieces insinuate mellow emotion. Additionally, I think it was able to achieve that emotion because of the minor keys, minor usage of sforzando and pitches.  While these pieces remind me watching a Caribbean or Spanish parade where there are live performances. The music insinuates nothing short of excitement.