Tigue is a Brooklyn-based trio with a unique sound that combines contemporary classical music with art-rock.  Their most recent album, “Peaks” was described by New York Music Daily as an “imaginative, distinctive, hypnotic yet kinetic blend of indie classical, minimalism, post-rock, and drone music.” Their diverse performance at the Pregones Theatre on March 1st put several of these styles on display.  The program for the night consisted of three pieces: An Index of Possibility, commissioned from composer Robert Honstein; New Work, commissioned from composer Jason Treuting; and Quilts, composed by Tigue’s own Keyboardist/Percussionist Matt Evans.

An Index of Possibility could be classified as an experimental percussion piece.  For the entire piece, which lasted about half an hour, all three members played only percussion instruments.  The first “movement” of the piece began with percussionist Carson Moody slowly scraping the circumference of a flower pot with what looked like a screwdriver.  After about a minute, Percussionist Amy Garapic began playing a pattern of repeating tones on a xylophone, creating a sound reminiscent of church bells.  Evans sporadically added rapid rolls on a glockenspiel.  The second segment of the piece began with Garapic loudly striking a bass drum (and almost causing a few heart attacks in the audience).  It saw the group break into a fast, steady beat, with the xylophone and glockenspiel alternating between two notes, and the loud bass drum sounding periodically.  A third segment had the group return to some of the motives created in the first.  Garapic returned to the sound of church bells, with rhythmic augmentation resulting in single notes ringing out for five seconds at a time.  Shortly thereafter was an eruption of percussion sounds, created by more traditional instruments such as glockenspiel, bongos, wood blocks; and less traditional “instruments” such as a round saw blade and a bourbon bottle.  The instruments were set up in a semi-circle and one could see and hear the beat traverse across the semi-circle and back, each instrument given a few moments of prominence.  I found most interesting how the piece blended tonal and atonal elements.  There were quite a few moments when a melody could almost be made out before it retreated back into noise.

After the conclusion of the first piece, Tigue members paused to explain and set up for their next piece, New Work.  Because of Evans’ interest in mathematics, Tigue commissioned a piece based on the number patterns from Sudoku.  Without going into depth about how it worked, Tigue members began reciting a rhyme and then a stream of numbers.  They followed by intermittently sounding their instruments; Garapic playing a bass guitar, Moody on a drumset, and Evans on a miniature, or “toy” piano (according to him).  After observing Tigue alternate between recitation of numbers and playing sounds for several minutes, I could deduce that each number had a corresponding sound.  While not exactly pleasing to my ears, it was very interesting to see and hear (in person) a formula influenced by Schoenberg’s twelve-tone.  The end of the piece was quite unique; with each member stopping to “fix”/mess with their instruments and turning three amps on, creating [intentional] heavy, overbearing feedback on the sounds of their “work.”

Tigue’s third piece was my personal favorite. “Quilts” is a minimalistic rock-like piece with a danceable rhythm.  Evans told the audience that he composed the piece so that both Garapic and Moody could “rock out” on drum sets at the same time, while he played a keyboard with one hand and a shaker with the other.  Garapic played what looked like a traditional rock drum set while Moody played one with several bells and cups.  The piece was quite repetitive, with Evans alternating between four or five chords for the duration.  Likely a result of the minimalism, I noticed my brain filling in the piece with melodic lines that weren’t actually there.  I couldn’t help but feel that the mood created by the sustained organ and syncopated drums was very reminiscent of early 2000s post-punk such as The Strokes and Interpol.

In conclusion, Tigue put on a diverse and exciting performance that highlighted several different styles and kept the attendees engaged with experimental sounds and audience interaction.  In addition to creating an interesting brand of music that allowed audience members to draw parallels to indie rock, classical, and serialism, Tigue succeeded in creating a myriad of different sounds; making it nearly impossible for audience members to not be aurally pleased at some point in the performance. 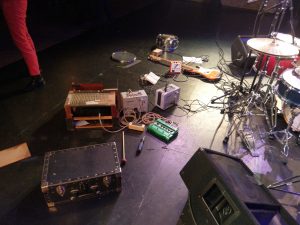 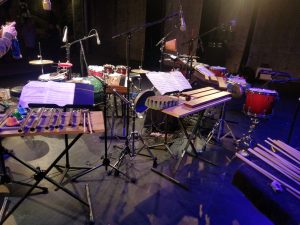 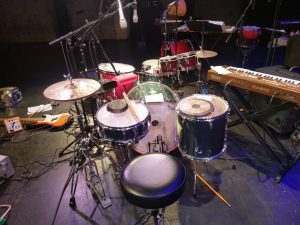