I went to see a live Japanese percussion concert yesterday and I was not disappointed. I went to LaGuardia Performing Arts Center with my mother after I found out about this free concert through Carnegie Hall. It turns out that this is the 4th time the Soh Daiko concert has been performed it has now become an annual spring concert.

The word “daiko” is the Japanese word for drums. Not only was I exposed to music and instruments I wasn’t aware of, but each piece that was played had a story and representation of the Japanese culture.

There is a piece called “Shishimai” (“Lion Dance”) is about a shy lion (in Japanese is called “shishimai“) who dances around in hopes of meeting new people and become friends. A man was dressed up in a costume and danced on stage and then off stage to the audience. There was a lot of families in this concert so unfortunately there were more screams from kids and laughters from adults. The performer had a mask that wasn’t a “lion” lion like we are use to see at a zoo, but more of a creature that is similar. He then would open and close the mouth of the mask, as if he were bitting something, which he did to a few audience members because being bitten by shishimai means good luck for the year. (No I didn’t get bit).

While shishimai was frolicking around there was music being played by two percussionist, one playing a brass bell and the other going back and forth between two taiko‘s (they looked like snare drums but more wooden and wool that it looks hand made). They played very soft to bring more attention to the lion performer than the music.

Another piece where the instruments are just background music to portray a character is in the piece called “Nimba“. This piece is based on the art of Edo Sato Kagura genre, what the announcer told us and it seems that this fisherman wasn’t ordinary. “Hyottoko” is the Japanese word for fisherman but specifically “country bumpkin”. Dressed in regular performance attire except for wearing a decorative mask, the performer throws “bait” at the “sea” which ended up being free candy to the audience. The fisherman’s theme music was different from the lion’s since it was more dancelike but a simple beat. Two percussionist, again one playing bells and the other playing two gaku-drums, where playing while the fisherman gave us a memorable scene.

One of my favorite pieces was the “Miyake Daiko” because out of all the performances, the beats and performance on just drums were very loud and overall amazing. There were 5 percussionist in total but only 3 instruments. Three people were playing “miya-daiko” or big drums and the other 2 were playing an odaiko, “big drum” but its literally twice the size of the miya and was played on both sides.

I’m so glad I was exposed to so much considering I knew little of Japanese culture and Japanese music. There was an intermission like period where the performers invited kids from the audience to come up on stage and got a brief lesson on the drums.

Here’s a picture of a set of drums that were the most used in the concert pieces. A lot of information was found on the program and also explained by an announcer. 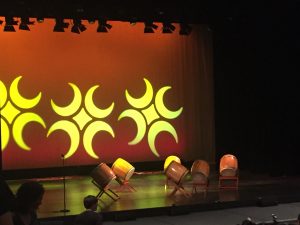