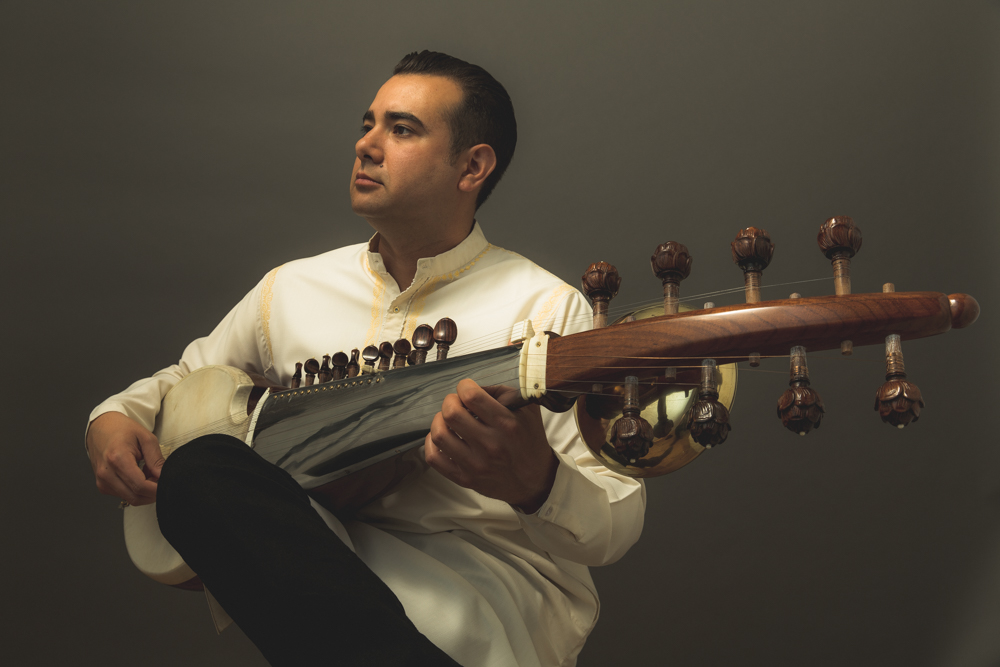 On April 7th, 2017 The World Music Institute along with the Brooklyn Raga Massive presented a concert in honor of the 95th Birthday Celebration of the acclaimed master of classical Indian music Ali Akbar Khan. The concert was held at Le Poisson Rouge and featured Alam Khan, the son and legacy of Ali Akbar Khan, as well as the Om Gam Ensemble. Ali Akbar Khan passed away in June 2009, but his profound impact of being an ambassador and teacher of classical North Indian music to the Western world is still strongly felt and acknowledged through his school of music, founded in San Rafael, California.  The Ali Akbar College of Music is run by his wife Mary Khan and son Alam Khan, who is also an advanced instructor of the sarod. The school holds a massive archive of over 8,000 hours of live musical instruction by Ali Akbar himself and 125-recorded concerts. Through online classes the college instructs students in the Ali Akbar Khan legacy across the United States and worldwide. 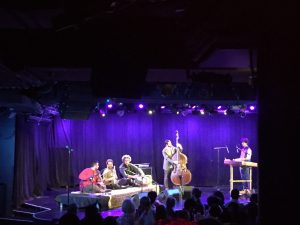 The concert at Le Poisson Rouge opened with the Om Gam Ensemble, which featured an eclectic band of instrumentalists led by bassist and composer Michael Gam, who is also a core member of the Brooklyn Raga Massive. The ensemble gets its name from the mantra of the Hindu Deity Ganesh: “Om Gam Ganapataye Namaha.” Ganesh is the Hindu elephant headed god who is known as the remover of obstacles, which the ensemble imitates by trying to remove musical obstacles that would theoretically divide music into separate genres. Om Gam presents a collaboration of artists from different musical backgrounds, including Indian classical, traditional African, Middle Eastern, and Jazz.  The ensemble consisted of Michael Gam on upright bass, Shivalik Goshal on tabla, Arun Ramamurthy on violin, Kane Mathis on the santur, and a guest flute player. 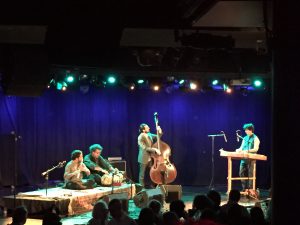 Om Gam began its set list with an unconventional daytime raga during the evening’s performance. In Northern Indian Classical music traditions, daytime ragas would be played only during daylight hours and vice versa with evening ragas. According to custom reflected in Vedic traditions, certain times of day produce distinctive energetic vibrations that would harmoniously complement the raga’s vibrating tone. Om Gam’s opening number began with a livelier daytime raga mood in opposition to a more contemplative nighttime raga atmosphere.   Tension was built as the upright bass was bowed with an increasing crescendo both in time and volume, and small wooden mallets also hammered the santur in a mirrored fashion. The tension was resolved when the flute came in with a lighter melody with the accompaniment of the tabla drums, which held a traditional raga beat. The following numbers of Om Gam were less traditional and conveyed a more eclectic sound as it included more diverse world compositions and timbres such as the Persian santur. For their second piece the ensemble covered a South African Jazz composition by Abdullah Ibrahim entitled The Mountain.  The rest of the set-list was a mixture of Indian, African, Middle Eastern, and even Celtic sounds. The ensemble was experimental in the manner they combined timbres, rhythms, and improvisations, a true fusion of the world music scene contained in Brooklyn. 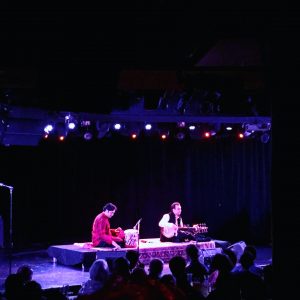 As the main act, Alam Khan on the North Indian stringed sarod and Nitin Mitta on tabla drums, showcased a more traditional and timeless modular exploration of two nighttime ragas. Each raga was improvised live that night with no prior rehearsal and both were a little over thirty minutes.   The first raga was a composition by Khan’s grandfather, the legendary North Indian composer and teacher Allauddin Khan, who also instructed Ravi Shankar. The meter was in 4/4 with a cyclical sixteen beat pattern across four measures. The rhythmic pattern revolved in a circular fashion, as the sarod player made alterations to the improvised melodic line, and the tabla player kept count of each measure on his left leg. The duo also followed a similar pattern of dynamics for each raga. In the very beginning Alam would start slowly exploring the particular pitches within a specific raga over the droning recording of the tamboura instrument.

Then he would slowly create a mutable melodic line which he would alter on each cycle with varies ornamentations and rhythms. The main characteristic of the sarod is of the use of glissandi across specific North Indian scales. The trademark sound is sliding across the strings as opposed to the bending of strings on the sitar. The sarod also has four main strings where the melody is usually played on and many others strings which function as drones or octaves when strummed.

In each raga, after the sarod player begins to develop a melodic idea, the tabla player begins the cyclical drumming accompaniment in a moderate fashion. The sarod then leads the dynamics as it grows in intensity and volume, often slowing down with a decrescendo only to crescendo again for a climax. The tabla player is also given moments to solo and to rejoin the sarod, as they exchange improvised phrases in a call and response fashion.

Each raga is in a specific tuning with set pitch patterns. For the second number both the sarod and the tabla had to be retuned to a different key. The instruments can only play one specific key signature at a time. The following raga was also a nighttime raga, but with a faster meter than the first with 7 beats per measure. Khan referred to it as the Garland of Ragas. The approach and sections were similar to the first raga but in a different key with a faster pace as it was the climactic closing number of the night.  The faster playing also allowed for more octaves and semi tones to be present in the resonance of the phrasing as Alam Khan struck more of the droning strings of the sarod.

The night was a successful homage to the late Ali Akbar Khan and to the Maihar Gharana school of North Indian music.   It was also announced that Alam Khan would be holding a two-day workshop on the sarod in Brooklyn the following day. Alam Khan exhibited the artistic mastery of the instrument synonymous with his father, as well preserving his teaching legacy. The Khan family’s music is devotional and rich in tradition going across the generations into our modern era. It was a privilege to witness an authentic and timeless presentation of North Indian classical music.