The Woodwind Music of Gene Pritsker

Composer Gene Pritsker presents a concert of his music for woodwinds; “I have worked with many great woodwind players and decided to produce a concert featuring some of theses amazing performers.” Five wind players and a poet will join Gene to perform solos, duos, chamber compositions, and music for winds and Samplestra (pre recorded electronics). The concert will feature: Michiyo Suzuki – bass clarinet, Keve Wilson – Oboe, Meighan Stoops – clarinet, Karen Bogardus – flute, Igor Begelman – clarinet, Paul Mills aka Poez – poet & narrator as well as Gene Pritsker on Guitar and as Di.J.  Premieres include a setting of the poem ‘How Far 2 Zuccotti Park’ by Paul Mills aka Poez, with the poet narrating, as well as ‘Affections’ for flute and oboe and a new Choro for oboe and Di.J.. Gene & Michiyo will perform ‘Ineffably Still’ for bass clarinet and electric guitar from Gene’s new chamber album ‘Melodies Alone Can Proudly Carry Their Own Death.’

This concert is part of the Composers Now festival. 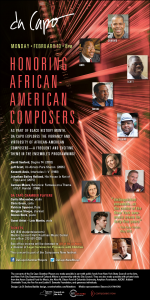 As part of Black History Month, Da Capo explores the vibrancy and virtuosity of African-American composers – a frequent and exciting theme in the ensemble’s programming! Box office income from this program will be donated to All of Us or None, a division of LSPC (Legal Services for Prisoners with Children). This concert is part of the Composers Now Festival.

The imagined boundary between “art” or “Classical” music and “popular” music has been shifting over the past decade. Or perhaps a better word is dissolving, as musicians find themselves listening, working, and performing on both sides of this imaginary divide. Audiences, too, seem to embrace a greater variety of music than ever before, bringing the habits of practices of different musical cultures together. This sometimes awkward, sometimes exhilarating friendship between “Classical” and “popular” was especially felt in the second performance of the 2017 Ecstatic Music Festival when the NOW Ensemble, a chamber group dedicated to playing new music, met with the Brooklyn indie band San Fermin.

The pairing of these two ensembles may have seemed a natural fit for their members. Both of the composers in the groups studied composition at Yale, and both work with ensembles of unusual instrumentation. Moreover, as the host of the program, John Schaefer, pointed out, both groups seem to operate like rock bands, with members of the group writing new compositions or songs that draw on the individual strengths of the performers. And yet both are also like typical “Classical” ensembles, with pieces orchestrated in detail and parts given out to performers. Both ensembles play music written specifically for them, or directly by their members—typical of rock bands, but not at all the norm for “Classical” chamber ensembles.

The NOW Ensemble held down the concert, performing two original compositions in the first half, and then joining San Fermin in the second half for a collaborative work as well as familiar songs from that band’s catalogue. The NOW Ensemble is an eclectic group of instruments:  flute (Andrew Rehrig), clarinet (Alicia Lee), electric guitar (Mark Dancigers), double bass (Logan Coale), and piano (Michael Mizrahi). Finding repertoire was a challenge and they tended to perform works for “open” instrumentation until they had commissioned or composed their own. Such was the case of the opening number, “Dreamfall” (2013) by the group’s electric guitarist, Mark Dancigers and the title track their newest recording. The piece is in three movements: the first movement seems to convey the descent into sleep with slow falling motion in a pointillistic texture, followed by some nostalgic cadential figures (are we falling asleep in front of the TV?) The second movement conveyed more anxiety through tight dissonances between the flute and clarinet and rapidly repeated notes especially on the electric guitar. The last movement returns somewhat to the sonic space of the opening with that pointillism achieved by isolated pitches played by the instruments at wide distances, though not extremes, of register; rich piano chords, arpeggiated with the flute echoing the highest pitch of the chord suggest a sort of calling out into the distance. The work ends with big stately piano chords punctuating a repeated “chugging” rhythm in the guitar and long sustained pitches in the woodwinds. If we have awoken from this dream, is has been a slow process, not a sudden awakening, and we bask in the warm glow of this pleasant sound world.

Ellis Ludwig-Leon, composer for San Fermin, offered the NOW Ensemble a new work titled “Simple Machine” which had its world premiere in this performance. The “machine” of this piece seemed to be small repeated patterns, almost little melodic circles, limited in pitch and interlocking among the instruments in syncopations reminiscent of Gamelan so that a single pitch could be enlivened by being heard by different instruments in different short rhythms. The machine seems to lose momentum as the clarinet repeats a pattern against a very low grinding double bass note, before flourishes in the flute suggest that the piece will take off again. Instead, gentle repeated arpeggiated chords in the piano bring the piece to an end.

Mark Dancigers “Gulf” (World Premier 2017) was written for this encounter between the two ensembles and inspired, according to the composer, by the view he has in Florida where is a Visiting Assistant Professor of Composition at the New College of Florida in Sarasota.  http://dancigers.com/about

The work seems to evoke the clear waters of the gulf, with a shimmering surface on top of larger more static sounds and undulating, repeated patterns in the guitars that invoke waves. The piece opens with rhythmic strumming, not out of place in any “indie” song today, layered over with the flute playing short repeated punctuations and long wistful tones in the clarinet that are then taken up by the violin. The piece, like others on the program, has the feeling of general harmonic stasis—there is no strong pull anywhere harmonically, which creates a sense of ease. On top of this, punctuated remarks by the trumpet, saxophone, flute, and clarinet suggest busyness, but nothing threatening. Harmonic changes happen through juxtaposition: a move from one sonic “shade” to another, perhaps the way the color of the water might change suddenly when a cloud passes in front of the sun.  Textural changes take place over time, lending an organic feel to the work. Repeated notes are passed around the ensemble, slowly building a simple melodic motion that is overlapped to be thicker and then varied slightly as it grows to include the basic patterns decorated.

The concert closed with San Fermin performing a single from their most recent recording (Belong, to be released in April) as well as songs from their previous two studio albums, Jackrabbit (2015) and their self-titled debut album from 2013. Their music is rich in timbral variety, which the NOW Ensemble expanded in this performance, helping the performance come close to the thickness of the studio recording. Vocalist Charlene Kaye seemed uncomfortable to be performing in a concert hall setting with the audience seated and attentive, and yet completely still. For “Jackrabbit”, the group’s infectiously lively title track from their last album, she instructed the audience to get up and move—not an easy demand for the audience in the narrow rows of the concert hall, but gamely attempted by all.

While the two ensembles may move freely between the worlds of classical and popular music, it seems that audiences do not. The applause between movements of “Dreamfall” may have met with chagrin by the classical audience, in the same way that the silent and stiffly seated audience seemed antithetical to the festival and club-going group that came out to hear San Fermin. The opportunity for audiences to mix is perhaps one of the most valuable opportunities that the Ecstatic Festival provides each year.

This concert was recorded by WQXR for on-demand streaming at their new music website Q2. You can download it or stream the whole performance or individual pieces by visiting http://www.wqxr.org/#!/story/listen-live-san-fermin-now-ensemble/

Ecstatic Music Festival http://www.kaufmanmusiccenter.org/mch/series/ecstatic-music-festival/ is underway now through early May at the Kaufman Center. The Festival seeks to bring diverse musicians together for a thoroughly original collaborative concert.