Presented in a beautiful, acoustically resonant sacred space on the Upper West Side, Canticles of the Holy Wind is a concert-length work for 32 singers. This concert coincides with the release of the premiere recording on Cantaloupe Records.

Bang on a Can comes to Brooklyn with its annual incomparable super-mix of boundary-busting music from around the corner and around the world! The 2017 Bang on a Can Marathon will feature 8 hours of rare performances by some of the most innovative musicians of our time side-by-side with some of today’s most pioneering young artists.

2017 BANG ON A CAN MARATHON SCHEDULE (subject to change): 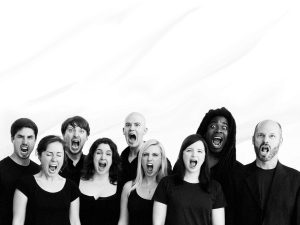 John Adams’s The Gospel According to the Other Mary

Stern Auditorium / Perelman Stage
John Adams’s critically acclaimed and mesmerizing new take on the Passion story, The Gospel According to the Other Mary, tells the story of Christ’s last days from the perspective of three people closely attached to him: Mary Magdalene, her sister Martha, and their brother Lazarus. Adams’s score is dazzlingly eclectic, with vocal writing that runs a gamut of styles from laments and dramatic choruses to a trio of countertenors recounting the biblical tale. The drama is colored by unusual instruments, including the exotic cimbalom, electric bass guitar, and an array of percussion. All of these elements come together in a work of tremendous power and otherworldly beauty.

“That warm dark realness was a doorway between worlds and she visited often. This is where all sound, dreams, and ideas lived. A cloudy dark purple space where forms emerged from formlessness, some familiar, some new. In this space of memory, of future, she found an alignment between those that are remembered and those that are forgotten. They would appear and dissolve into patterns and sometimes plants or caverns. This new awareness, this realm of making, dark maroon cloud, it’s a hidden choice that we all have, but it’s been so lied about and covered up with opaque abuses and accusations. It’s hard to find. In truth, it’s a birthright to our species, perhaps the most important one.  A gift directly from the blue marble that we all depend on. And now, like sight, the vision behind one’s closed eyes to the maroon clouds of otherness is a mine of our mind where we can excavate new designs of sound, paper, ink, words, and no one can stop us.” — Nicole M. Mitchell from “What Was Feared Lost”

Nicole Mitchell is an award-winning creative flutist, composer, bandleader and educator. Having emerged from Chicago’s innovative music scene in the late 90s, Mitchell’s music celebrates contemporary African American culture. She is the founder of Black Earth Ensemble, Black Earth Strings, Sonic Projections and Ice Crystal, and she composes for contemporary ensembles of varied instrumentation and size, while incorporating improvisation and a wide aesthetic expression. The former first woman president of Chicago’s Association for the Advancement of Creative Musicians (AACM), Mitchell celebrates endless possibility by “creating visionary worlds through music that bridge the familiar with the unknown.” As a flutist, she has developed her own unique improvisational language and has been repeatedly awarded “Top Flutist of the Year” by Downbeat Magazine Critics Poll and the Jazz Journalists Association (2010-2016). Her newest work with Black Earth Ensemble explores intercultural collaborations — Bamako*Chicago with Ballake Sissoko (kora) and Mandorla Awakening with Kojiro Umezaki and Tatsu Aoki. Another recent interest is multidisciplinary work, where Mitchell incorporates original video art with her music (Mandorla Awakening I and II, Interdimensional Interplay for Solo Disklavier and Prerecorded Flute). Mitchell has performed with creative music luminaries including Craig Taborn, Roscoe Mitchell, Joelle Leandre, Anthony Braxton, Geri Allen, James Newton, George Lewis, Mark Dresser, Steve Coleman, Anthony Davis, Myra Melford, Bill Dixon, Muhal Richard Abrams, Ed Wilkerson, David Boykin, Rob Mazurek, and Hamid Drake. Ms. Mitchell is a recipient of the Herb Alpert Award (2011), the Chicago 3Arts Award (2011) and the Doris Duke Artist Award (2012).  As a composer, she has been commissioned by the French Ministry of Culture, the Chicago Museum of Contemporary Art, the Stone, the French American Jazz Exchange, Chamber Music America, the Chicago Jazz Festival, ICE, and the Chicago Sinfonietta. She is a Professor of Music at University of California, Irvine.

Mezzo-soprano Abigail Fischer and all-star collection of musicians will perform the New York premiere of Harold’s complete song cycle Variations on a Summer Day, for voice and nine instruments, setting the twenty stanzas of the Wallace Stevens poem of the same name. The nonpareil Boston Chamber Music Society, with Max Levinson, piano, will perform the New York premiere of his 2016 Piano Quartet, and members of the Cygnus Ensemble will play the World Premiere of his Battle Piece for two guitars.

“Inspired by old American parlor songs, I’ve written a set of “Work Songs” on the general subject of artists writing about their work. The best song cycles, I think, take on the same subject at different angles, and chip away at it until something is revealed. Artists’ working habits have always fascinated me—Matisse sculpting in bed, Charles Ives’s Bach-ian eye-opener—not so much for the insight they provide into the actual work, but more as an idealized template for how an artist should exist in the world.

The text of the piece is drawn from a range of sources: Woody Guthrie’s journals, a Melville poem, and contemporary American poets Mark Levine, Andrea Cohen, and Lorine Niedecker.

And it seemed only fitting to write it specifically for a group of my close artistic collaborators: Becca Stevens (voice & guitar), Gabriel Kahane (voice & guitar), Ted Hearne (voice & keyboard), Nathan Koci (accordion), and Taylor Levine (guitars). I’ll join them on piano, and we’ll fill out the program with songs by Becca, Gabe, Ted, and Nathan.”

Singer-composer Ted Hearne premieres an intimate and ecstatic collection of vocal music, accompanied by a band of longtime friends and new collaborators.

Hearne’s The Source, called by Ptichfork “some of the most expressive socially engaged music in recent memory — from any genre,” and “a twenty-first century masterpiece” by the New York Times, turned the words of Chelsea Manning and the Iraq War Logs into a penetrating oratorio. His latest songs strike a more personal chord but sacrifice none of the force. The centerpiece of the performance is a new song cycle set to text by the renowned contemporary poet Dorothea Lasky.

Acclaimed for “consistently champion[ing] contemporary music with consistent excellence” (The New York Times), American Composers Orchestra showcases two premieres—one commissioned by Carnegie Hall—by two cutting-edge composers and a classic from Steve Reich, Tehillim (Hebrew for “psalms”). Inspired by cantillation he heard in Israel, Reich sets four psalms in an exotically scored and rhythmically invigorating work that pulses with life and is considered one of the modern master’s most thrilling compositions.

Be sure to ask about Student Discounted Tickets!

The omnivorous sonic explorations of Nick Zammuto (The Books) come together with the equally far-reaching soundworld of Grammy-winning vocal octet Roomful of Teeth, who explore the full range of the human vocal apparatus, from Tuvan throat singing and yodeling to Korean P’ansori and Persian classical singing. The performance features new works by Zammuto and others TBA.